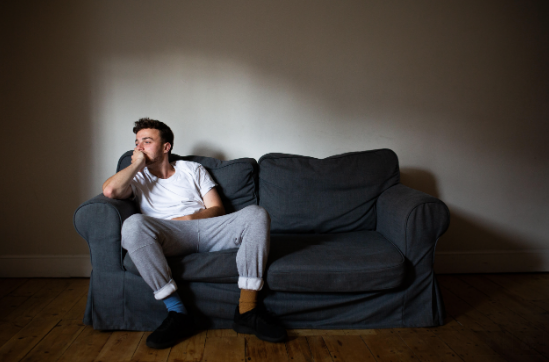 Sheffield based singer-songwriter Tom Featherstone is set to release his new single ‘Alright (At Home)’. The track is a reworking of his 2019 debut, with this version being produced in lockdown alongside electronic alt-pop artist Minimal Animal. The lo-fi ambience of this iPhone recorded vocal makes Featherstone’s agile voice all the more captivating, paired with soothing acoustic guitar and haunting textures. Inspired by Ethan Gruska’s recent work, Featherstone and Minimal Animal have created a sonic haven which allows listeners to find solace between the notes during a universally uncertain time.

Speaking of the track, Featherstone explains: “The original single had been released way back in November 2019 and the chorus and sentiment of the track just came back to me in lockdown, it was important to sing over myself in a way to combat anxiety. I called Nick (Minimal Animal) with the idea of this new version exposing the vulnerability and intimacy of the lyrics; he was down and made it this beautiful track that we get to release together.”

Featherstone is not only consoling people through his lyrics, but he’s also providing aid beyond the music. From the proceeds of the song, Featherstone will raise money for Sheffield-based community and cultural centre, Foodhall. The volunteer-led group feed and support many of Sheffield’s most vulnerable, especially during lockdown.

Featherstone says: “Whilst feeling helpless in many ways during lockdown, we decided that whatever money we can generate to support Foodhall after the monumental work they have been doing and continue to do to support the most vulnerable in our community, is worthwhile. The track certainly comes at a time where things aren’t “alright” or “all as it should be” at all with what we’re becoming increasingly aware of abroad in the US and Yemen as well as locally with serious inequalities remaining in our society for way too long with too little being done by those in power. I guess the hope of this track is to bring a bit of peace and rest to those fighting for justice and progress in this time as we all seek to educate, challenge and change ourselves and our communities.”

The 21 year old artist has really honed his craft over the last 12 months, penning subtle-pop melodies within indie-soul instrumentation that is influenced by the 1975 and Phoebe Bridgers. ‘Alright (At Home)’ is an inspiring release that shows a more introspective and philanthropic side to this talented artist. Featherstone and Minimal Animal look forward to being able to write, produce and release more music as life starts to find its new normal.

For more information on Foodhall, visit the website: https://www.foodhallproject.org/