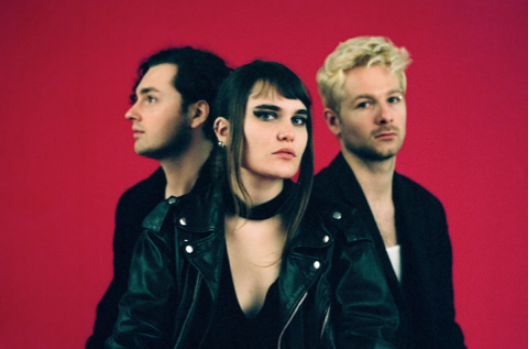 “The idea for Sleeper’s video is an adventure into the past conquest of space, while at the same time looking at young people’s expectations of the future at that time. We see this idea as a paradox because in our 21st century, we use technology to seek the magic that science awoke in past generations”

3’20 of cyber-punk sonic clash and venomous Karen O-esque vocals, ‘Sleeper’ is a thrilling left-turn for Calva Louise and daringly uncharted territory for the band. Opening a Pandora’s box of existential questions, the lyrics of ‘Sleeper’ seek to plug the listener into a virtual world as the band examine our rapidly evolving relationship with technology and the endless possibilities of simulated reality.

‘Sleeper’ is the latest track to emerge from the band’s upcoming new EP ‘Interlude of The Borderline Unsettled’ – set for the release on 22nd November 2019. The new single follows directly on from the rabidly-received single: ‘Belicoso’; a track that has already been taking the airwaves of Radio X, BBC 6 Music and BBC Radio 1 by storm. Both tracks will feature on a brand new EP ‘Interlude For The Borderline Unsettled’, to be released this Winter via Ditto Music on all digital platforms. With all tracks produced and mixed by Tarek Musa (Spring King, Dead Nature), the new EP marks the band’s first new material since their critically acclaimed debut album ‘Rhinoceros’ back in February.

After a summer of scorching live sets at major festivals the likes of Boomtown Fair and Kendal Calling under their belts, the Manchester-based trio now look to let-loose the spoils of a hotly anticipated new EP with 4 UK headline shows in December. Catch the band at the following dates and venues:

Calva Louise appeared in a feature on Sound Juicer