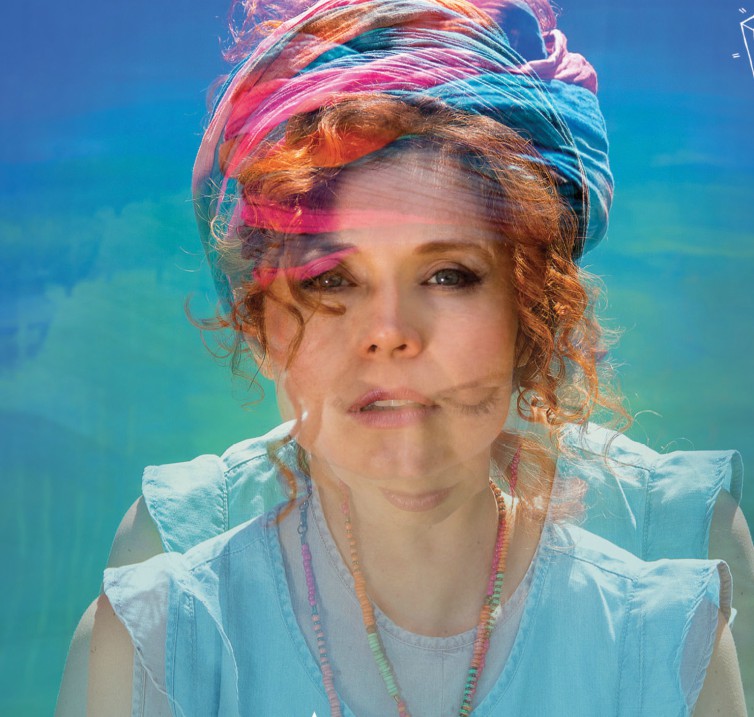 She received recognition through her performances on the Los Angeles scene and her MTV appearance doing a duet with Vanessa Carlton, of the hit song ‘A Thousand Miles’. She released her debut album “Revving Wings” in 2012 and toured independently through Europe and the US.

See our exclusive interview with the singer below

Touring with my new EP “Diamonds” in Germany, Switzerland and West of the USA with my band is an immense adventure. (Self-organized). Vagabonding fulfils my desire for human bonding which manifests itself during and after the shows. Unexpected discoveries of people’s life stories bring me the feeling of oneness and awe – we are all connected by our griefs and joys. I keep being surprised by how much people are moved by the music and how it opens them up to share their own life with us. At the end of 2019, we played a show in London, where I live now!

Indie-electro-pop with an artful edge. London based producer Brendan Davies and I merged natural and electronic sounds, creating soul-stirring emotion in the process. Layers of drums and beats coupled with thick synth bass, vocal textures, acoustic piano and strings, guitars and electronic sound. Drawing on hard life experiences and falling in love with life just as it is I wrote “Diamonds”.

My living room, singing solos with the choir, giving concerts starting at 7 years old. Living room LP music stole my heart: Russian singer-songwriters singing to a 12 string guitar, Whitney Houston, French singers, Pink Floyd, Abba, Beatles. My mother composed her own songs on guitar to famous Russian poems. I memorized all of them by heart.

Production-wise: I remember I decided to make a massive action step: left everything I knew in Los Angeles (where I was living) and secluded myself at a friends house in Silicon Valley where I temporarily set up my home studio for 2 weeks (my only vacation time that year). There I finally searched for the sound, pre-produced almost my whole first album “Revving Wings.” I orchestrated all the string parts, threw in whatever ethnic instruments I felt like hearing in my record (like Erhu, accordion)… After this, I finally knew what sound I wanted. Then I took it all to my producer in San Diego and he helped to make it come alive. I recorded everything in LA studio with the grand piano at my fingertips and an amazing sound engineer.

“I say to this moment, ‘Stay, you’re so beautiful!’” For me to write an incredible song I have to feel fully present to life, challenged by it… fascinated. I open up and feeling its intense strength. At the piano I let it flow! …This is where songwriting begins. Hardship, pain, perspective, love, honesty, searching, hearing the world around you tell the story.

Songwriting process draws out the most honest emotions and feelings in hiding. When I sit down at my keyboard, in solemn, touch the keys, and allow my voice to flow and the words to reveal what I feel. Some of my most intense experiences in life impact the birth of a great song. Normally in the process, I keep discarding melodies and riffs that are only mediocre (which is what often comes first) till I get to the most juicy, true, amazing parts. This process opens up the heart and lets it say what it really feels deep down about myself, about life, about the world and how we connect to it.

My recent songs from my “Diamonds” EP, like ‘Stay With Me’, ‘Angels and Demons’, ‘Beautiful Sou’l are born out of life chapters several years long. They tell my story and other people’s stories of struggle, life falling apart, depression, but with finding a perspective, light, insight, strength through it. We are one.

After my show in North Germany, a man came up to me and said, “I lived without hope for the last 3 years. Tonight I feel hope again. I’m gonna go and change my life!” and he walked out the door determined. I’ve heard from many women and men before they felt feelings of liberation, release after they hear me talk and sing live. But every time I am surprised.

A song calling us to action and fighting for human rights ‘Wake Up’ will be released in March. In February a single called ‘Higher’ will come out. Over a dozen new songs are in pre-production stages and I’m writing a few new ones for the upcoming EP to be released in 2020. German and US tour is underway – I love being on stage.

Even if it hurts and burns, up and down these thorny roads I won’t give up even the worst, cause pressure forges Diamonds!