Interview || Catching Up With The Nectars 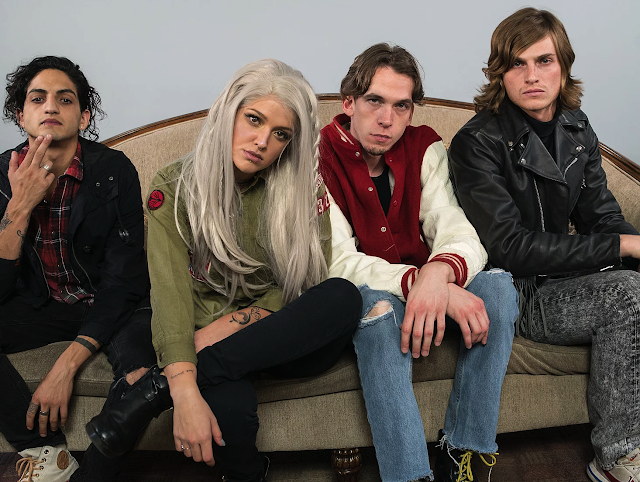 Hailing from New Jersey, The Nectars have burst onto the indie rock scene with their rebellious spirit and contagious energy. Brainchild of Jon Paul (Bass/Vocals) and Mike “Mad Dog” Montalbano (Drums), Michael Baron (Guitar) and fronted by Jessica Kenny (Vocalist), The Nectars combine  edgy dynamics with vocals that will make the hair on your skin stand up. They recently released the video for their latest track ‘Heaven’, a heaping helping of rock ‘n roll that mixes chord-y abandon with raging riffs.
The Nectars will be taking to the stage at Meatlocker on January 27th alongside the likes of Tula Vera
Warpark,  RoswellDebacle, Geese and Teen Unit. Scroll down for deets.
To those not familiar with you, how would you describe your sound?
Thrashy Girl-Fronted Indie Punk
Which three albums have influenced you the most creatively?
The Strokes- Room On Fire, Pixies- Dolittle, Nirvana- Live At Reading
What ingredient do you feel is essential to crafting your sound?
Tetrahydrocannabinol
Studio work and music creation or performing and interacting with a live audience, which do you prefer?
We all love spending time in the studio, writing music and recording, but nothing beats performing live with an audience. It gets loud and sweaty, and that’s exactly how we like it!
Any new artists on your radar?
METZ (they just came out with a killer album called Strange Peace that we love!) King Krule (His new album The OOZ is incredible and is a perfect mood setter for when we break out the bong.)
Trent Reznor once said “To me, rock music was never meant to be safe. I think there needs to be an element of intrigue, mystery, subversiveness. Your parents should hate it.” What are your thoughts on this statement?
AGREED. It’s never fun playing it safe. You gotta dare to take chances. It’s not about playing the right notes, it’s about playing the nasty ones..and if we have something to say, we’re gonna say it, whether it’s expressed through words or melodic/rhythmic improvisation.
What has been your most memorable performance so far?
Playing a month long residency at Pianos in NYC was especially memorable! We met and got to hang out with a lot of amazing fans, friends, and family, and Pianos in general is just a really fun place to play. Other than that, the most memorable performances are always our most recent..we always aim to leave it all on the stage and play every show like it’s our last. That makes every show really special.
And which performance would you prefer to forget?
NONE. Even if something goes wrong with the sound, or Baron breaks a string, every show means something to us.
If you could collaborate with, or perform alongside any artist, who would it be? And why?
Performing alongside The Pixies would be a dream come true. They are such an incredible band that has influenced us since the beginning.
Famous last words…
Stay Sticky