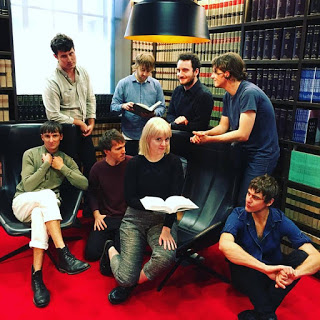 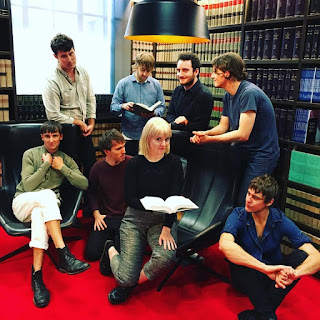 We caught up with Dorsal Fins, the brainchild of Melbourne’s busiest musician/composer, Liam McGorry (Saskwatch / Eagle and the Worm). The band was originally envisaged as a ‘studio-only’ project, however, fortunately the temptation to step on the stage was too great.

Channeling the type of erratic yet deliberate outfits like heroes Javelin & The Avalanches; ‘Mind Renovation’ pinballs around the musical spectrum from disco to electro pop, psych rock with some delicate ballads – all glued together with the dual swoonable vocal prowess of front-people, Jarrad Brown & Ella Thompson.
Dorsal Fins have also developed into something of a live favourite, playing shows alongside bands like The Cat Empire & Saskwatch, and being a highlight at festivals like Boogie, Secret Garden & Paradise.
2016 brings new life and a new album, ‘Digital Zodiac’ arriving in September.
Hi there, how are you and what are you up to today?
Well thanks! Just working my day job in a record store (Northside Records) in Melbourne.
To those not familiar with you, how would you describe your sound?
We’ve got two lead singers, we like to traverse through a whole heap of styles but really just keep the music interesting and fun.
What are the 5 most influential albums that have influenced you the most?
The Avalanches – Since I Left You
Javelin – No Mas
Air – The Virgin Suicides
Wings – Band on the Run
Nick Cave and the Bad Seeds – No More Shall We Part
Which other artists are you into at the moment and why?
There are so many… Nicholas Allbrook, Unknown Mortal Orchestra, The Drones, Alvvays, Connan Mockasin, Crepes, Charlie Hilton… They’re all just doing really interesting things sonically…and more importantly writing great songs.
Are there any key pieces of equipment that you are using to define your sound?
Not really to be honest, I think our ‘sound’ is more defined by the people involved. Ella and Jarrad both have pretty individual and distinctive voices and I think the way they work together is pretty integral to Dorsal Fins. Everyone else in the band also adds their own touch to the songs as well…
What would you say some of the challenges artists face today in the music industry?
I think it’s hard to balance making ‘art’ and making a ‘product’. Not that I’ve really worked that one out or know the answers… It’s also challenging to make ends meet for a 9 piece band but it’s worth it!
Where do you gather songwriting inspiration?
From a lot of the bands above, from a lot of my friends (within the band and without) who write songs…
Take us through your songwriting process. Are there any particular steps you take when put music together?
Generally, I’ll write a whole heap of instrumental music for the album and send it to Jarrad and Ella who will pick some of the tunes and write over the top. We’ll rehearse once or twice before going into the studio and then record it all and edit as we go. It’s pretty collaborative and spur of the moment in the studio and a whole heap of fun to be involved with.

What’s the best gig you have ever done and why?

I’d say our showcase at Bigsound last year was probably the best we’ve ever done. There’s something about a warm evening in Brisbane, a big crowd and an outdoor show.

And the worst?
To be honest I can’t really remember many bad shows which is a good sign I guess?
If you weren’t a musician what would you be?
Nowhere! It’s really tough to imagine doing anything else…
Do you have any particular gigs or festivals that you dream about playing?
Totally. Meredith Music Festival in our home state of Victoria is one of our favourite festivals…That’s the dream…followed closely by Primavera, Airwaves, Glastonbury, Red Rocks, etc. We’d love to make it over to Europe and America soon. See how we go with these tho.
If you could perform alongside any other band or artist, who would it be?
For me it would be Beck. He’s such a great songwriter and chameleon. Definitely an inspiration.
Do you have any information regarding upcoming releases, projects or gigs in the pipeline that you would like to tell us about?
Our second album is called Digital Zodiac is coming out in September this year. The first single will be out in July! Keep an ear out.