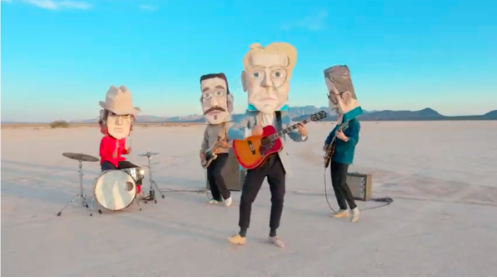 Nashville indie rockers Colony House have shared the music video for their new single, ‘Original Material’. Directed by Caleb Chapman of Colony House and Jon Steingard, the video set out to be a parody of themselves as a band trying too hard to be “original” only to realise it’s just not working out. The track is taken from the band’s upcoming third studio album Leave What’s Lost Behind, which will be released on January 24th, and is available for pre-order now.

“The parody quickly became a little more real than we anticipated,” explains singer Caleb. “We spent a ton of time making these ridiculous cardboard and duct tape heads, choreographed a subpar dance routine, drove across the country to the Californian desert with our van and trailer… in AUGUST, filmed in 100º plus weather while wearing said “cardboard and duct tape heads”, and maybe got kicked out of a small town or two… all to make a video about trying too hard. In hindsight, I think the joke might have been on us the whole time.”

The band gave fans a first taste of the upcoming album with the release of their ‘Original Material’ as well as previous single ‘Looking For Some Light’. A confluence of serendipity, fate, and inspiration led the band back to their roots lyrically. Leave What’s Lost Behind incorporates a storied family history going back generations, mixed with folklore surrounding a runaway to create an album worthy of being a classic novel. The band teamed up with Ben Shive, who produced Colony House’s debut album When I Was Younger, to tap into the freedom of their formative years as a band.

Colony House first captured attention in 2014 with their lead single ‘Silhouettes’ taken from their debut album When I Was Younger, which became the #1 played track on SiriusXM’s Alt Nation for four months straight.

The band followed the debut album with Only The Lonely, which featured singles ‘You Know It’ and ‘You & I’, and led Entertainment Weekly to include the album on their Must List and describe it as “…[fusing] swampy blues, scuzzy garage rock, and infectious indie-pop… its massive jams will sound great booming from a festival stage.”

Colony House has performed on Late Night with Seth Meyers, CONAN, TODAY show and more and head out on the road with a major North American tour following the album release, and the UK and European shows later in the Spring.